You might think I’m being dramatic, but that’s how it felt. Like a nightmare. The biggest airport in the world – WORLD – loses all power for 12 hours. And I just so happened to be there to experience it. Luckily, I was with friends from grad school. You might think, “so what, it couldn’t have been that bad”. Ha, let me inform you.

I already get extremely stressed out about airports and flying. Like, all week had nightmares about it. I don’t want to get lost or lose my bags or all of the things most people worry about. So, when I walk into the airport and about 30 seconds in, the power goes out, I’m nervous. At first, everyone is just like ‘hm, that’s weird, hope it doesn’t screw up my flight’. Didn’t think about it too much, we continued to walk to the bag check line. Once we get in line and are standing there for a little, I decided to call my boyfriend and tell him what’s going on just in case I get delayed. But  – oh wait – there’s no cell service. I could not text. I could not call. I could not google. Nothing. Great….

As we stood there in the dark (no emergency lights or anything, weird right?), I made friends with a great family from Denver, Colorado. Even though I’m the counselor, they were the ones keeping me from getting down. So we figured, between the four of them and myself – we have five phones. We took turns keeping them on and off to not use all of our battery. After I’d say about an hour and a half, I started to really wonder. Georgia state police were now everywhere, some had canines. No one had answers though. Couldn’t tell us the cause or how long it would be out. I wasn’t sure if we were in danger at this point. I finally was able to connect with my mother, and I had her get on Google. Still no answers, but she at least knew I was safe. She also let me know the Giants were beating the Eagles. But lets all laugh at that outcome….

Four hours goes by. Four. Hours. Of standing in one place. With luggage. No lights. No cell service. No food. No water. They were not letting flights come or go, and apparently, there were hundreds of planes out on the tarmac with passengers in them (and they ran out of food and water)! Sitting there after landing hours ago, I can’t imagine. They kept letting people in to the airport, so the lines kept growing and were miles long. I swear, I took a walk to check it out. They wrapped and wrapped around each other. Like, at what point do you stop letting people in when we aren’t going anywhere?! It was so hard to remain calm and positive. Like, why am I stuck in a huge, pitch black airport, with no cell service?! It was apocalyptic. When is the ONLY time we have seen malls and airports lose all power and people can’t go anywhere? Zombie movies…

At this point we had to make decisions. Do we stay and wait for the power to come on and take the delayed flights? Do we get a hotel room for the night and fly out in the morning? Drive to another airport and fly out of there? Well, what can you really do with no cell service?? We can’t even call for an Uber to leave this place. Finally, around hour 5, people were starting to be notified that flights were cancelled. Yes, that took five hours. This is when people started to try and leave the airport. This was an adventure in itself, because they shut down the terminals, so no cars could even come get anyone. There was only one area that all thousands of us could go. This area was downstairs in the pitch black, which required a flashlight to get through.

Are you as stressed as me yet?

Remember, we can’t call for Ubers. There are no taxi’s. We somehow got a hold of our friend who lives in GA and begged her to drive an hour to come get us. But, we could not find her due to her also losing signal as soon as she got there. We walked, and waited,  in the freezing rain, and maybe 45 minutes later we found her. She offered us her hospitality and we were able to make plans to get home the next day. Exhausted cannot even explain what I was feeling. Unfortunately, most Delta flights were cancelled for two days. My flight was rebooked for the following evening, but honestly, I didn’t trust it. So – my friend and I did it the hard way. We drove back to Jersey in a rental car. I left at 9:30 am and got to my home in New Jersey at 1:30am. BRUTAL.

One thing I can say is I’m thankful that there wasn’t panic, and everyone remained calm throughout the entire airport. I made a joke that if this was in Jersey, that would not be the case. I am also grateful for the family I was next to for four hours. They truly kept me positive and laughing. I’m also thankful that I had not checked my bags or gotten on a plane, and I was able to get out with all of my stuff. Everyone was sending prayers my way, and I couldn’t be more grateful. Let’s just say, I will be staying away from airports for a while.. 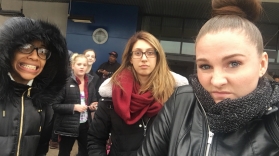 PS: The power outage was due to a rat chewing through wires, causing an electrical fire underground…….yup.